How to Make and Train With a Jegi

A jegi (roughly pronounced "jay" like the bird and "gi" like the karate uniform) is a traditional Korean toy, similar to a shuttlecock.  It's used to play a game called jegichagi (literally, "jegi kicking").  Legend has it that the game was developed from martial arts training.  No one knows if that is actually true, but there's some evidence for it.  Either way, there's no reason it can't be part of your training today.

Traditionally, the jegi was made with a 100 mun coin and hanji, handmade Korean paper.


Even though 100 mun might sound like a lot, this coin had so little value that in order to buy anything, you needed a lot of them.  People would thread them onto strings like beads and tie off the ends, then they could drape the strings over their shoulders to carry them around.  So even poor people had a lot of these coins lying around.


In the spirit of the people who played jegichagi so long ago, we're going to make them out of whatever materials that we have at hand.  I like to use plastic bags, coins and string, but you do you.  Like a Jedi's lightsaber, you will design your jegi to be one-of-a-kind, perfectly in tune with your connection to the Force, from only the purest Kyber crystals... wait, where was I?  Oh, right, making a jegi.

You want two squares of plastic, each about one square foot.  For those who live in parts of the world that use a reasonable system of measurement, you get to make your squares 30 cm x 30 cm.  You don't have to be exact, and in fact I encourage you to experiment with bigger or smaller squares and see what you like.  Bigger squares means longer strips, and more air resistance, so the jegi will move more slowly through the air. 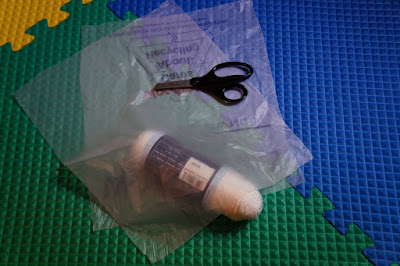 You can use any coin you like, or really any small object that has a little weight to it.  You can also use multiple coins.  The important thing is that you get the weight right.  Too much weight, and your jegi will fall really fast and be difficult to use.  Too little, and it won't move easily through the air and it will be difficult to kick it high.  You can experiment to find your personal sweet spot.

I'm using a single penny.  I like the weight it gives my jegi, and also we should get rid of pennies whenever we can.  I should mention that this makes for a very light jegi, which will be difficult for traditional play but easier for martial arts training.

There are easier ways to do this, but if your art is usually practiced barefoot, it's nice to have a little extra padding.  If you want even more, you can wrap your coin in a tissue before following these steps.

a) Fold your squares in half and place the coin in the center.

b) Fold your coin into its own little strip along the folded edge. 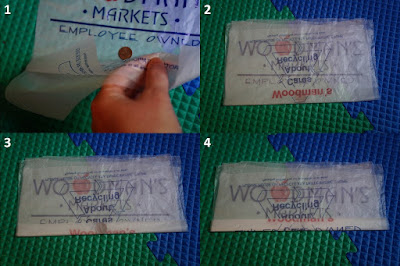 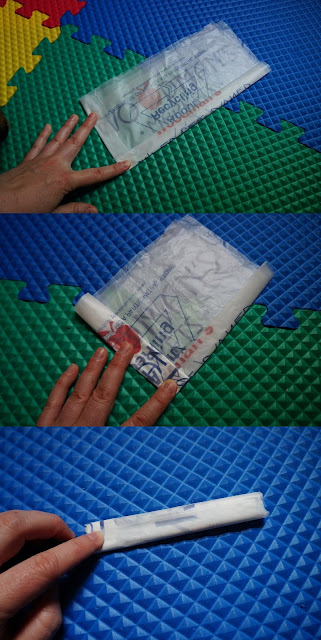 Take your string and tie the plastic down near the coin, so the coin is secure and can't slide out. 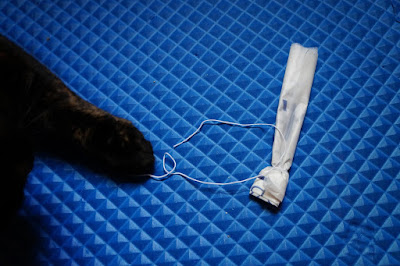 5.  Cut the plastic into strips.

If you've been careful with your folding, it should be easy and quick to cut the plastic into strips, about 1 cm (half an inch for my fellow Americans) wide.  If, like myself, you have the craft skills of a drunk toddler, you'll probably have to cut each strip individually.  But success is a journey not a destination (or something) and eventually you will have a jegi.

6.  Feather out the strips.

You've got it!  Even if you skip all this arts and crafts nonsense and just buy a jegi, you will have to do this step, which is to separate the strips from each other so that they can catch the air individually.  Wait, you can just buy these things?  And I'm here with my scissors and string like a sucker?


So you have your own jegi!  Now what do you do with it?  Traditionally, jegichagi was played by kicking the jegi with the instep of the foot, trying to keep it from touching the ground, with the winner being the player who kicked it the most times before it finally fell.

I play it a little differently.  My method is picking it up, kicking it once, chasing it to wherever it fell, and trying again while some old Korean guy starts laughing on the sidelines, proceeding to demonstrate how easy it is and offering some advice that is beyond my language skills to understand.  Anyway.

Certainly you can play the traditional version of the game and use it to develop your hip muscles (or you can do that without the jegi).

There are also variations where you have to keep the jegi in the air using only a specific kick, or where you can't put your foot down between kicks, or where the jegi is kicked between players in a group.  Have fun with it!


If you're training barefoot, I recommend doing a few light practice kicks so you know how your jegi feels before you go nuts (or before handing off your jegi to a young student).

Pick a striking technique.  Any punch or kick will work.  Toss your jegi into the air and try to hit it with the technique you chose.  Don't worry about where it lands, just try to make your hand or foot connect with the jegi.  If this is your first time playing with a jegi, you will probably find this plenty challenging.  Experiment with which techniques are easy and which are difficult.

Here are a few ideas, in order of difficulty:

I've never met a student who can reliably hit a jegi with all of those techniques.  Even so, it's great for developing fast and accurate strikes.

Here are a couple of my younger students working their kicks on a jegi:


Ever played a basketball game called Horse?  You can modify the rules to play with a jegi.

One player issues a challenge.  It can be anything from "I am going to punch it and not miss," to "I am going to kick it with a flying spinning roundhouse kick with my eyes closed and make it land perfectly balanced on your head while reciting Funakoshi's 19th precept in Klingon."  The player then attempts whatever challenge they issued.

If they succeed, the jegi goes to the second player, who must attempt the same challenge.

If they fail, the second player does not have to attempt the challenge and instead creates their own challenge.

If you fail a challenge you didn't create, you get a letter.  Your first letter is H, then O, then R, and so forth.  Once you spell HORSE, you are out of the game.  The last player in the game is the winner.

Posted by gcmaybe at 5:08 AM No comments: