Should You Train Both Sides Equally? 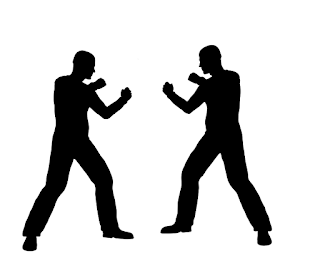 Approach #1:  Train Your Side

One school of thought is that you should prioritize the side that you are most likely to use.  You see this a lot in sports.  If you're an elite sparring competitor, you've probably come across this idea quite a bit.  Almost everyone has a "strong side," which is especially easy to see in, say, boxing.  Fighters are known for being orthodox or southpaw.  If you're not likely to switch your stance, you'll get more benefit for your training time if you practice from the stance that you're going to use.
And while that is a great idea for winning, it's not such a great idea for overall health.  When you train asymmetrically, you condition your body asymmetrically, which can lead to muscle imbalance, posture problems and injuries.  This phenomenon is especially obvious in fencing, which is an extremely asymmetrical sport.  Fencers typically hold a weapon in one hand without ever switching.  They also spend a lot of time in what is basically a back stance.  If you think about where you're sore after some intense stance work, you can imagine why elite fencers tend to have larger calf muscles on one side.  But often they'll also have more developed muscles on their entire back leg and on their weapon arm, and even on one side of the torso.  Muscle imbalance, besides looking kind of freaky, can give you some pretty significant joint pain and even interfere with your movement.
Which is why a lot of martial artists, including myself, prefer...

If your conditioning is symmetrical, your body will develop symmetrically.  (This is kind of a lie.  There are other things that can cause muscle imbalance, and in fact most people have some minor asymmetry, but for the most part this is pretty safe to say.)
So if you throw the same number of punches on both sides, you'll stress the muscles on both sides of your body equally and strengthen them equally.  Same deal for kicks and throws and stance work and anything else we do.
But there's one downside to this, which is why some people prefer...

Approach #3:  Train Your Weak Side

Very few people are truly ambidextrous.  You probably have one side that's more coordinated than the other.  If that bothers you, the natural solution is to give the other side a little more practice.
And there are some good reasons to do that!  But here I would caution people to be careful and think about what exactly you NEED your weak side to do.  If it's just a dislike of the idea that one side is more skilled than the other, maybe consider that it's not that big a deal.  No matter how much you train, you're unlikely to ever have exactly equal skill on both sides of your body.  And if you try, you could end up training your weak side disproportionately enough that you develop some of those muscle imbalance problems.
One way to get around this is to work your technique in an easy, relaxed way.  You can fix very many technical details without physically working all that hard.  And since you're not pushing the limits of your strength/speed/flexibility/etc., you're not forcing your muscles to adapt.  Don't get me wrong, you need to stress those muscles some.  But doing some very light finesse work and then blasting a target 10 times on each side will cause a lot less muscle imbalance than blasting a target 500 times on one side and 10 times on the other.
-
Good luck with whichever approach is right for you!
Posted by gcmaybe at 5:30 AM 1 comment: