The Physics of High Blocks

What is the optimal angle for a high block?

Very often high blocks are really strikes.  But getting your arm over your head to intercept a blow is not an insane thing to do, and that's what we're looking at today.

First, let's look at the physics of something you probably don't want to do.

At 0° your forearm is parallel to the ground.  In this scenario, you're taking the full force of the blow on your arm that would otherwise hit your head.  This is usually a pretty good trade, but it could be better.

Once your arm is angled, there's the potential to let the blow slide off the arm.  In terms of physics, part of the blow's momentum will go into your arm (ouch) and part of it will be deflected harmlessly away (yay).

This all boils down to two equations:

Traditionalists are welcome to adjust their glasses, pull a pencil out of their pocket protector and tap this into a calculator.  I'm going to just ask my phone because I'm a hip young whippersnapper and not cringey at all, bruh, YOLO!  Also you just lost The Game. 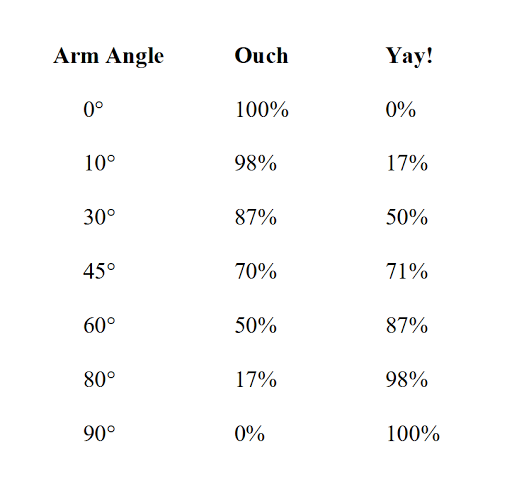 So, from this chart, it looks like the best angle is 90° because ALL of the momentum is deflected and NONE of it goes into the arm.  Which sounds great until you think about what a 90° block actually looks like:

So at 90° against a blow coming straight down, you're not protecting your head at all.  At 80° you're covering a tiny part of your head.  If you do manage to line it up just right, you're deflecting almost all of the impact and taking very little damage to the arm.  But that is extremely risky and ill-advised in the chaos of a situation where you need to deflect a blow to the head.  At the other extreme, a 0° angle covers the most head area, but you deflect nothing.  And it's a good idea to deflect SOME because then the attacker's body can follow along to the side as you deflect, giving you a little control over their movement.

So ultimately, the optimal angle isn't even the right question.  Better questions are, did you deflect the attack?  Did you take serious damage?  Can you still fight?  With all that in mind, happy training!

Posted by gcmaybe at 5:00 AM No comments: