Why Are Left-Handed Fighters Called Southpaws?

Spoiler:  It's not baseball. 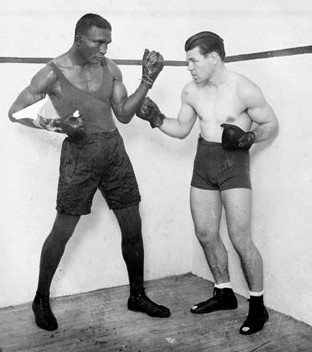 There's a popular story--and it IS just a story--that the term "southpaw" originated in baseball.  According to the story, old baseball diamonds were built with home plate to the west, so that a pitcher's right hand was on the north side and the left hand faced the south.  So any left-handed pitcher used his southern "paw" to throw the ball.

This idea has been thoroughly debunked, but if you ever heard it and believed it, don't feel bad.  This myth has been around since at least 1908 when baseball writer Tim Murnane had to explain that he used the term "southpaw" because players were left-handed, not because their left hands sometimes faced the south.  To say nothing of the fact that baseball diamonds didn't all face the same direction in the first place!  Moreover, in the mid 1800's when the term started to appear in baseball, it was used to refer to any left-handed player, not just the pitchers.

No one is really sure why a person's left hand became known as a south paw.  The best guess out there is that it's because south and left were associated with the devil and/or general badness.  Traces of this remain today when we might describe a person's uncharacteristic poor decision as having their judgment go south, or refer to the devil on our left shoulder when we're not proud of our motivations in a particular decision.

On the other hand (no pun intended but I'll go with it), a left-handed student may have an advantage in sparring other martial artists because both lefties and righties tend to get more practice against right-handed sparring partners.  Left-handed people only make up about 10% of the population, so statistically speaking, 90% of the partners and 90% of the practice will be against right-handed opponents.  Which explains why left-handed fighters are so dramatically over-represented at the professional levels in combat sports.  17% of professional boxers and almost 19% of professional MMA fighters are left-handed--they're almost twice as common as they are in the general public.

So being left-handed can make a fighter just a little bit more dangerous than their right-handed counterparts.  For combat sports like boxing where the term may have originated, more dramatic language can translate into ticket sales.  All those devilish connotations could have been to a fighter's advantage.  It's not hard to imagine a clever wordsmith playing up a left-handed fighter's devastating and maybe even diabolical "southpaw" power shot.

But imagination aside, we know that calling an athlete a "southpaw" didn't come from baseball but rather from a term for an actual left hand.  And if you thought otherwise, well, that myth has been duping people for over a century, so I guess we're in good company.  But let's not propagate it!